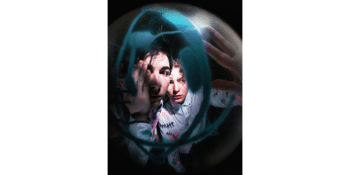 Those Who Dream: EYE SEE NIGHTMARES

Lynott's Lounge (Northbridge, WA)
Friday, 29 October 2021 8:30 pm
11 days away
18 Plus
Alternative
POP
Rock
Send this event to
Those Who Dream are an Australian alternative rock duo and multifaceted creative project of brothers Josh and Cooper Meyer. Their captivating energy and revealing lyrics has not only earned them the acclaim of NME, Pop Buzz, Rock Sound and Alternative Press; but more importantly, a cult-like following across the world.

The duo are as DIY as it gets, citing “YouTube tutorials” as their teachers of filmmaking, 3D animation, design, songwriting and production. The sum of these talents can be best seen in the duo’s extravagant music video for their breakout single ‘Violet’, featuring surreal and eerie visuals reminiscent of psychological-horror films.

Growing up perpetually fascinated by art in all of its forms; the brothers quickly learnt to channel their own struggles and emotional turmoil into creative expression. After creating individually and experimenting in bands, it quickly became apparent that their best work was created together.

Now, it seems their hard work is paying off; with their debut EP ‘Life in Cyan’ reaching #4 on Apple Music’s Rock charts, going viral on TikTok, and touring with the likes of The Faim and Between You & Me.